When it comes to social causes, I believe that, for the most part, the Jewish people have historically been on the right side of history. Seeing current events and challenges in this context is what guides me as chair of the JCRC for 2020 – 2021. It has been a privilege thus far to serve our amazing committee who have dedicated themselves to the greater good. The greater good I refer to is graphically displayed in our JCRC “Torah driven” core values, which guide actions, define “our lane” and shared commitments. Our committees include representatives from every synagogue and Jewish agency in San Antonio.

It would be impossible to cover all of that we have accomplished this past year in a short article, so I will speak of just one or two examples in each of our “verticals” or “cause areas”. 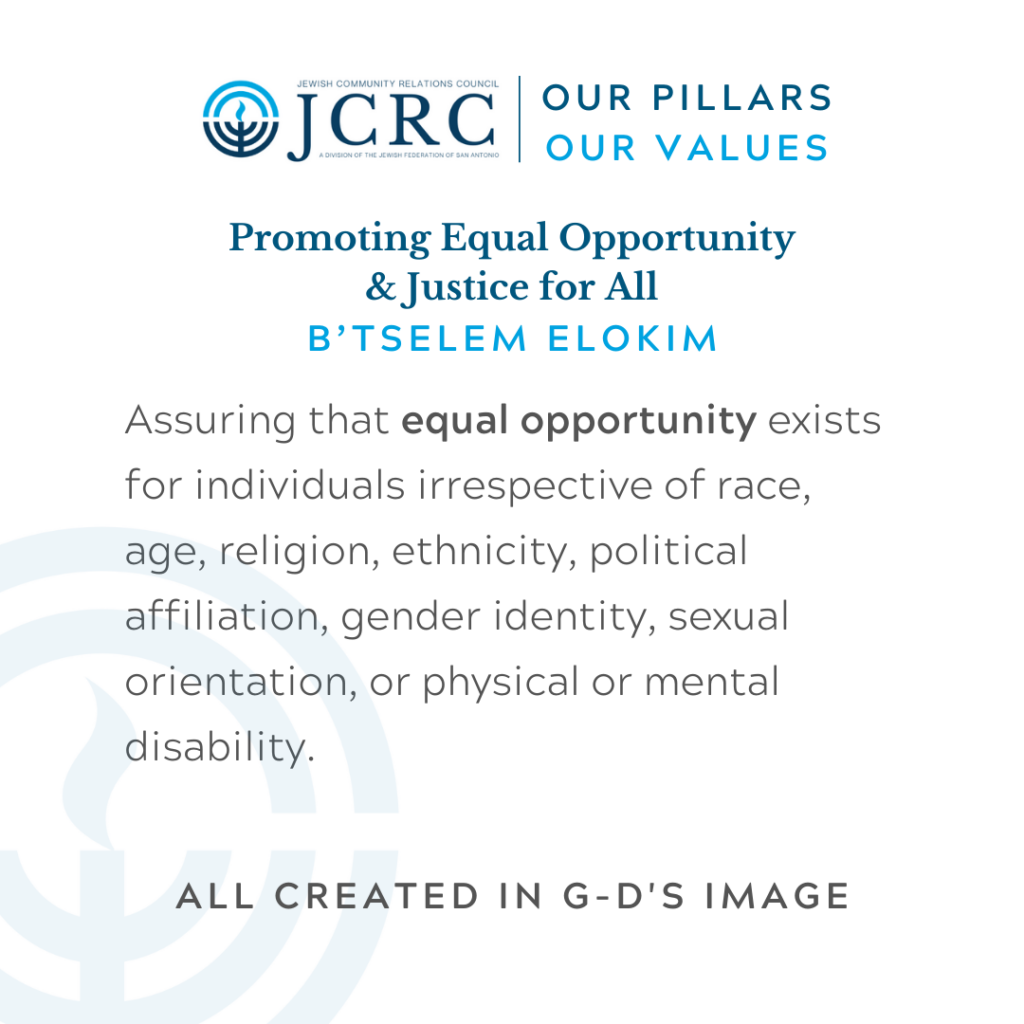 At JCRC, we interpret this to mean “Promoting Equal Opportunity and Justice for All” and as such, defines one of our four committee’s focus areas. In November, we held a panel discussion entitled Mass Incarceration: A Policy Crisis. It was a powerful and moving event to see those impacted by mass incarceration speak courageously about their lifetime sentences due to offenses that they have paid for many times over, alongside our District Attorney Joe Gonzales, Sheriff Javier Salazar, Texas State House Member Diego Bernal, SAFFE Officer Alonzio Hardin, and Texas Civil Rights Project Attorney Peter Steffenson. Our public officials listened and responded candidly about the challenges they face to making change. University of the Incarnate Word President Tom Evans opened the event by describing the problem. The U.S. is less than 6% of the world’s total population yet has 25% of the world’s incarcerated population. Broken down, the number illustrated the disproportionate impact incarceration has on People of Color. People of Color are six and a half times more likely to be arrested for drugs than White people who commit the same offenses and Latinx are twice as likely to be incarcerated as Whites.

Perhaps the ultimate definition of equal opportunity in a democracy is the equal opportunity to vote. In July, during the height of a surge in COVID numbers in San Antonio, the state held its runoff primary election. Our JCRC was a leader in helping get the word out to our Jewish seniors and seniors throughout the community that they were eligible to vote by mail, and did not have to worry about going into public spaces to cast their vote during the pandemic. We partnered with San Antonio Jewish Senior Services and the National Council of Jewish Women to mail out 650 vote by mail ballot applications with instructions should seniors choose to vote by mail. We have continued to work to ensure the rights of all Texas voters are upheld by volunteering to monitor polls, sending letters to encourage people to vote, participating in a non-partisan voter protection effort, and spreading the word about early voting and registration deadlines. 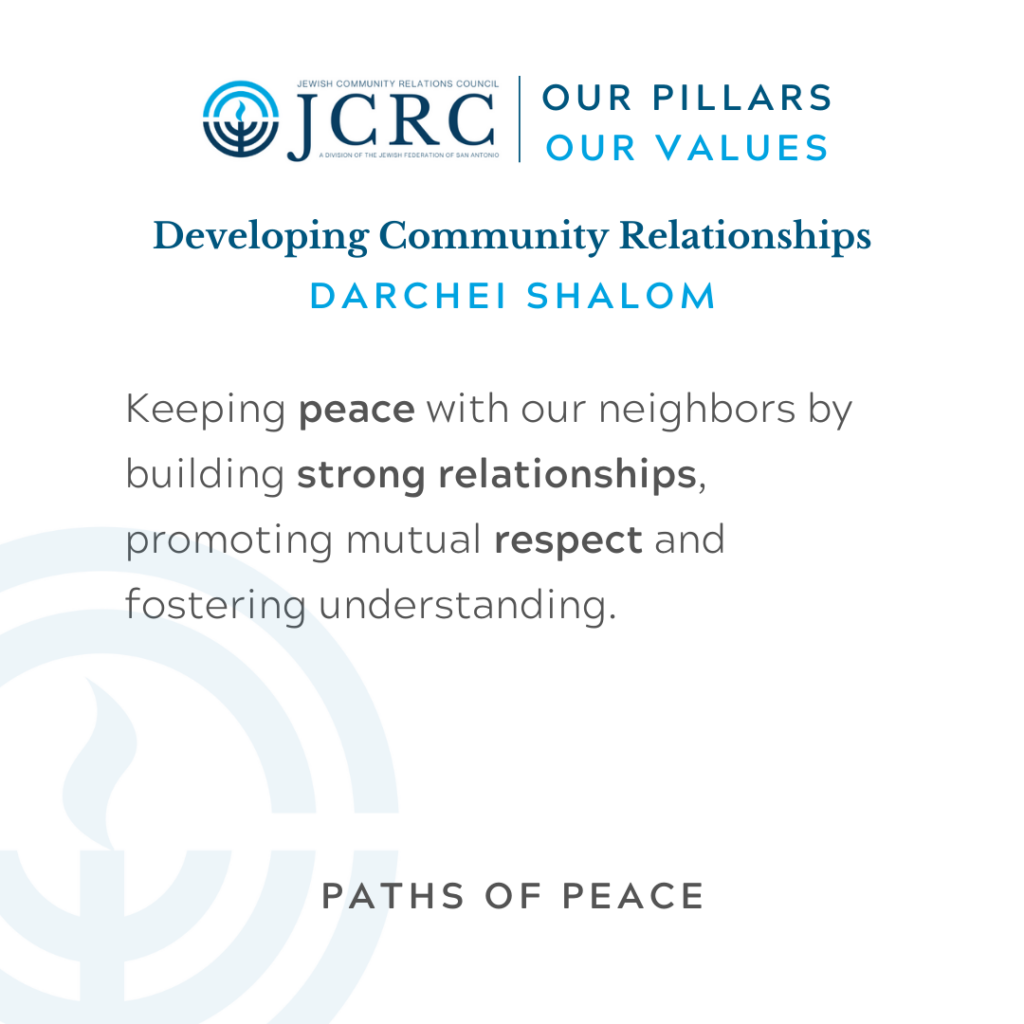 Our “Developing Community Relationships” action team lives this value in the ways in which we engage our community partners of color and faith. After the explosion of ammonium nitrate in Beirut on August 4, caused more than 192 deaths, 6,500 injuries, and left an estimated 300,000 people homeless, we reached out to the Lebanese Maronite Community here in San Antonio. This community has been a part of the fabric of San Antonio since 1925. Father Charles Khachan was grateful for our outreach and message of sympathy during this difficult time for his community.

The JCRC also provides outreach to all the schools in San Antonio and surrounding area. We sent out over 1,000 Jewish holiday calendars to school leaders, along with explanations of observance levels and resources about Judaism. These calendars were sent in the spring as administrators were planning the next school year, and again in August as a reminder before the High Holy Days. Anyone experiencing difficulty with religious observance can reach out to the JCRC Director, Lisa Epstein, at EpsteinL@jfsatx.org for assistance. 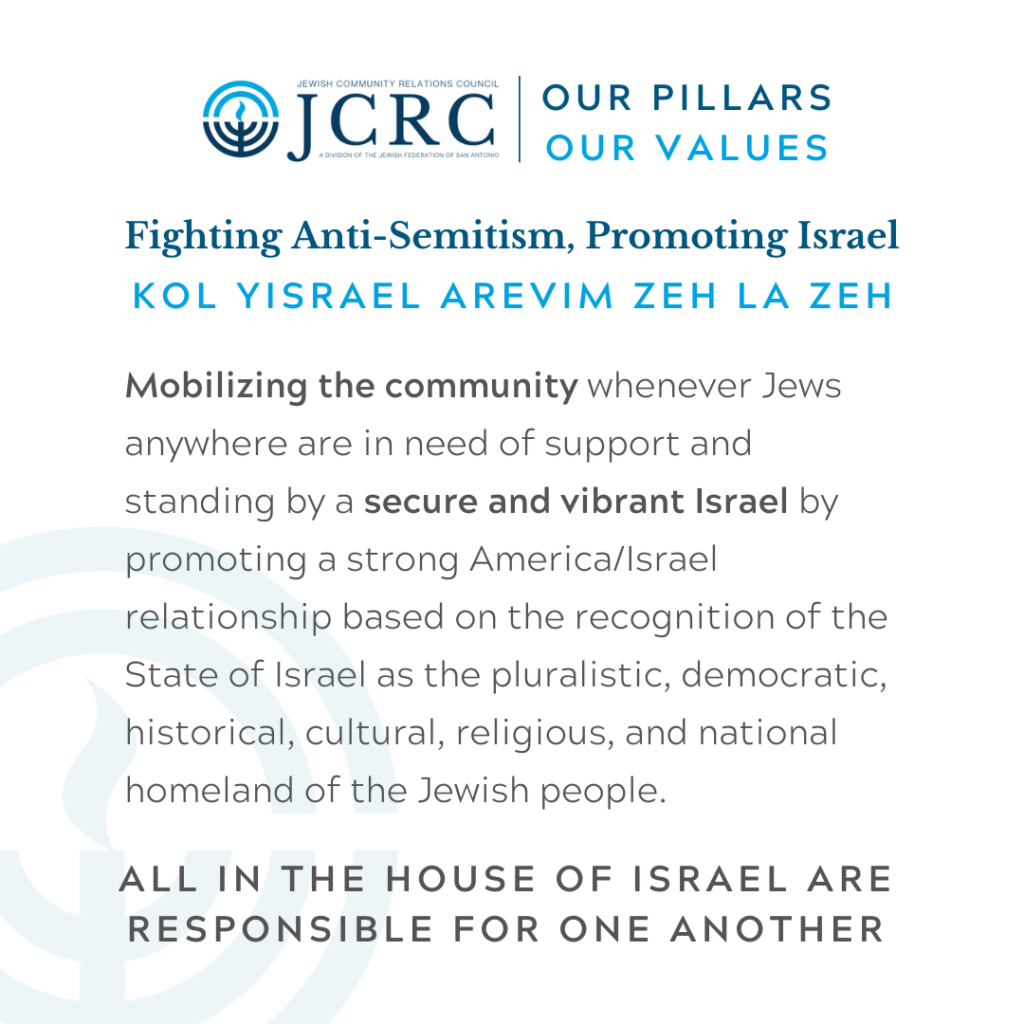 “Fighting Anti-Semitism and Promoting Israel” is the noble cause of this action committee. Most recently, we created the new Israel Leadership Institute. The ILI was established to help our teens entering college face a growing anti-Semitic and anti-Israel sentiment that has taken root in many campuses. Twelve students participated in our inaugural cohort, led by Natalie Steiner, the Director of Student Engagement for Hillel San Antonio.

The JCRC, on behalf of the Jewish Community, wrote a letter to the Veterans Affairs Administration regarding the swastikas and words “They died for their fuhrer” on headstones in the Fort Sam Houston cemetery. I am pleased to report that our outreach, along with outreach from many other Jewish groups, was successful in having these hateful symbols removed. 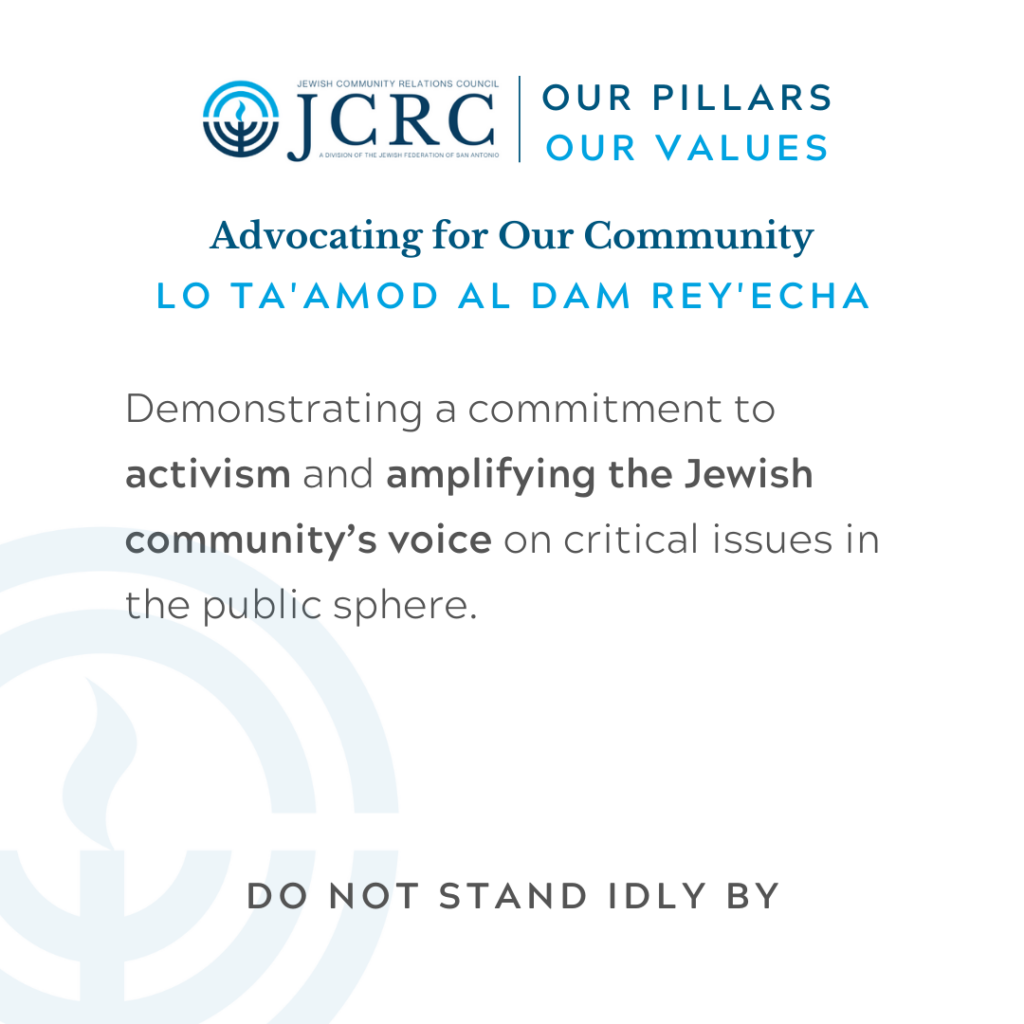 This action team has adopted the mission “Advocating for the Community” and will take positions and actions in areas that affect us all. When Facebook and Instagram have proven to be breeding grounds for antisemitism and hatemongering, we participated in ADL ‘s Stop Hate for Profit campaign, pressuring Facebook to take a stronger stand against hate on their platforms. We advocated our Senators and Congressmen to vote for the Never Again Education Act, passed this May. This bill expands U.S. Holocaust Memorial Museum education programming. The bill requires the museum to develop and nationally disseminate accurate, relevant, and accessible resources to improve awareness and understanding of the Holocaust.

We will continue advocating for issues of importance to our Jewish community and Jewish values in 2021 with the Texas Legislature during Jewish Communities Day.

Winslow Swart is the JCRC chair and chief inspiration officer at Winslow Consulting. 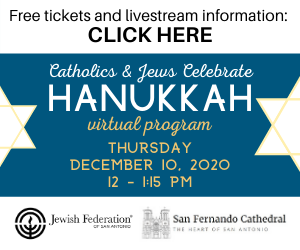 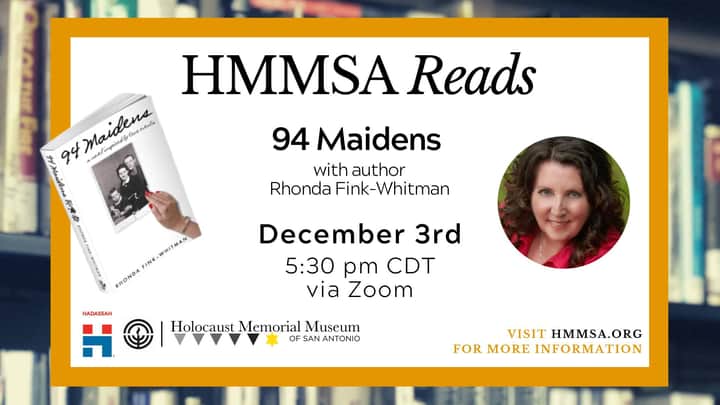