Having just returned from Israel a few days ago, this week’s column is dedicated to the incredible people doing amazing work across our San Antonio partnership region in Israel.

For those not familiar, San Antonio is a member of a consortium of seventeen U.S. cities in partnership with Budapest, Hungary, and the Western Galilee of Israel, specifically Matte Asher & Acco. Local contributions to our Federation’s Annual Campaign support this partnership and the many amazing programs taking place there.

Of all the places we toured, one of the highlights we visited was the Kivunim program, where young Israeli adults with special needs are provided the resources to become independent members of Israeli society.

Another focal point was meeting with the Mayor of Matte Asher, Moshe Davidovitz, his Director of Strategy and Foreign Relations, Shai-Lee Somer, and Golan Rozenberg, Director of the Community Centers of Matte Asher. We discussed some of the innovative programming in support of the unique diversity in the region and had the great fortune to present them with a check for $70,000 raised by our community’s Ukraine Crisis Campaign, to cover the costs associated with the region’s absorption of Ukrainian Jews.  Specifically, these funds will be used for programs that support Hebrew language instruction, mental health,  employment, and workforce training, as well as integration events for immigrants and local families.

We also visited the Galilee Medical Center, the most Northern hospital in Israel, only six miles from the Lebanese border. Due to its proximity to a hostile border, we toured the heavily fortified underground facilities, which are always prepared for times of potential crises, including the newer emergency room reinforced with bomb shelter construction.

Finally, we wrapped up the tour with a visit to the Haifa Absorption Center for Ethiopian immigrants. In partnership with the Jewish Agency for Israel (JAFI), and through a generous endowment fund established by the Preisman family many years ago, the Jewish community of San Antonio has been able to provide over $40,000 a year to these efforts. As part of the visit, we participated in the traditional Buna Ceremony, where coffee was served along with traditional bread, and stories were shared by the immigrants of their incredible journeys of pain and suffering on their way to the Promised Land. 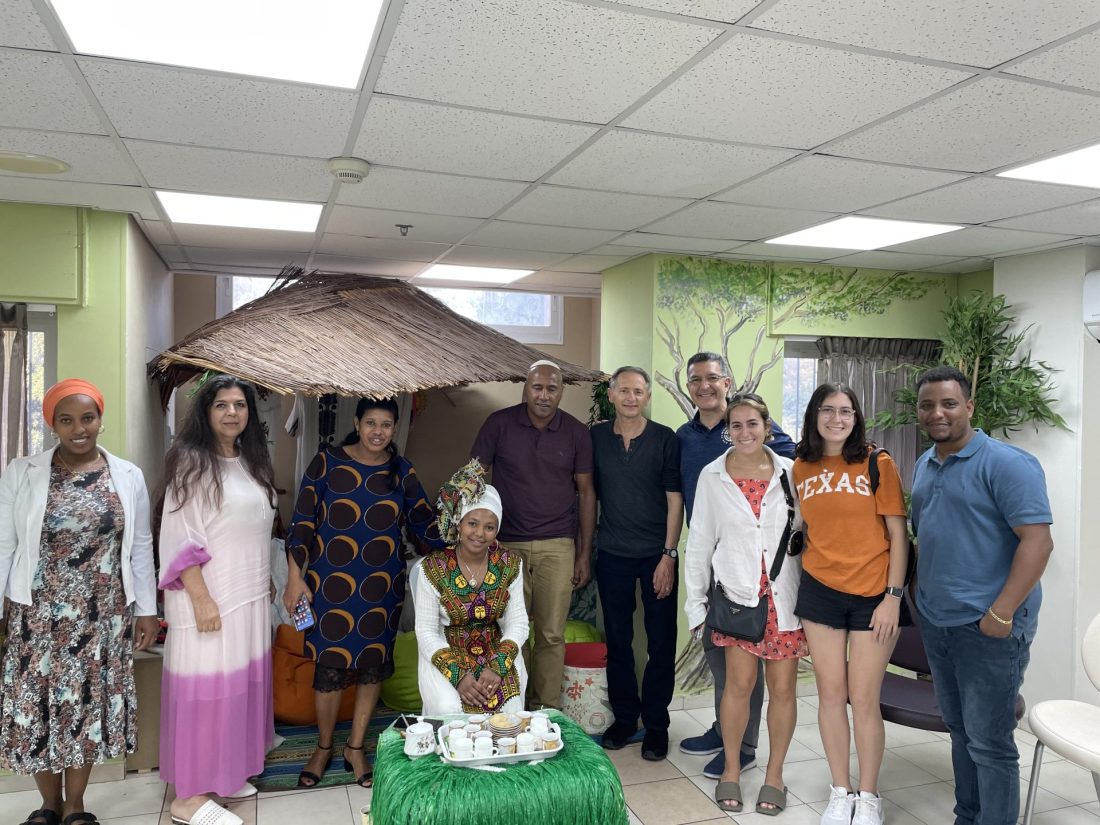 There were other experiences, too many to list, but meaningful and poignant nonetheless. What struck me on the eleven-plus hour flight back was the diversity of the region, and the numerous languages we heard over the course of these few days.

This week’s Torah portion is Noah. Although everyone is familiar with the infamous flood story in the namesake’s parashah, what is often not realized is that in this same portion is the seemingly out-of-place story of the Tower of Babel.  All I could think about on the flight back was that unlike Babel, where Gd punished the people and “confuse[d] their language so that one [would] not understand the language of his companion” (Genesis 11:7), I spent three days hearing foreign languages all day long, however, with the glaring difference that all of them had one uniting and common language, Hebrew.

Israel has many lessons to teach the world, but I cannot think of a timelier lesson in the coming weeks, as we enter the election cycle both here and in Israel. May we embrace the things that unite us and that we find in common with one another. Let us not focus on the differences that “confuse” us and cause us to be unable to hear one another. Rather, let us find that united language that helps us hear each other and grow together, learn together, and become better people together because we are…